How to choose your Carnival Costume, and the Preparations for the Big Samba Parading Day in Rio.

The Rio de Janeiro’s Carnival or Carnaval as it is popularly known in Portuguese; with all its excesses is one of the world’s spectacular sights of vibrant color and artistic events accompanied by scintillating music, poetry and dance. This four day wild celebration, which takes place before the beginning of Lent is celebrated at every corner of Brazil. However, the one in Rio de Janeiro is undoubtedly the biggest and the best in the world,   almost like a dream. 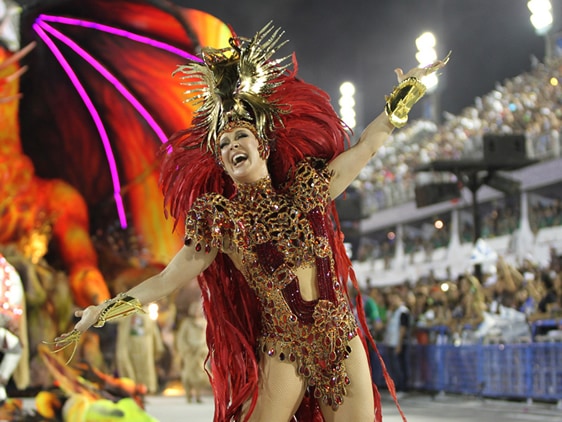 Parading in the 2021 Rio Carnival

If you wish to parade to the breath taking tunes of the samba in the Rio Carnival celebration, you must be dressed up in the most striking Samba Costumes. Imagine parading before one of the world’s biggest audience with foreign visitors alone that outnumber 500, 000 every year! Singing the Samba and dancing to the reverberating beats of the Carnival with millions of people watching you on television is a delightful experience. Almost everybody who has participated in theparade will tell you how much they enjoyed.

Picking the right costume can be an exhilarating task. You will be part of a specific wing or ‘ala’ of a Samba School. If you choose a Carnival ground costume, you will be part of a group of more than 200 people dressed up in the same attire who dance on the floor.  Float costumes look more glamorous but is more difficult to handle. Reserving a costume in advance is recommended as the costume needs to reflect the theme or ‘enredo’ of the group that you are playing for. You can pre-order your costumes and pick it up in Copacabana on February 12th, February 13th and February 14th, 2021.

Tips on How to Choose a Rio Carnival costume:

The Samba School is not an institution, but a community affair with the entire neighborhood joining in to help their samba troops. You can simply attend one of the samba nights and learn how to dance. Ensure that you thoroughly enjoy the parade, keep your energy level high and move in close coordination with the rest of the paraders. Make sure to reach the venue 2 hours before the march for the warm up. It helps you understand how to march by just following the people ahead, even if you have missed the rehearsals. And last but not the least; do not forget to sing your samba song!

Please arrive at your warming up area at least 2 hours before the parade. Below you will find the WARM UP TIMES. The schools are schedule to parade two hours later. Ex. The Samba School warms up at 19 hrs (7 PM) and parades at 21 hrs (9 PM).

The 2021 Warming Up Time table will be available around july.