Everything you need to know in the Rio Carnival.

The flamboyance of the gay crowd in Rio is particularly appropriate for the Carnival. This is especially true of the drag queens who vie with each other to produce the most outrageous and hilarious getups possible for the street parades and Carnival balls. During the week of Carnival there are several events that are quite suited for gays and lesbians. 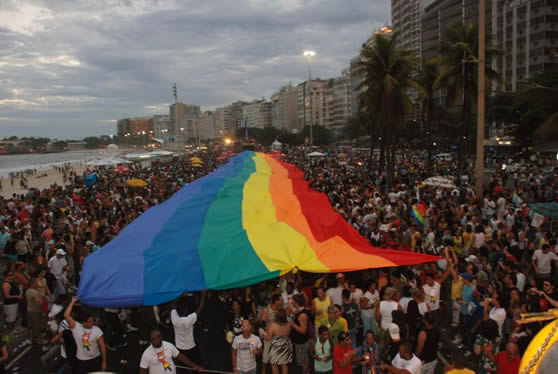 One of the primary gathering places for gays during Rio Carnival is on Farme de Amoedo near Ipanema beach. This area on Ipanema beach where gays usually congregate is named after the street and called Farme de Amoedo beach. One of the largest bandas, Banda de Ipanema holds three parades before and during the week of the Carnival.

The music for these parades is played by the Garota de Ipanema Band. Their parade is very popular with gays and a large number of drag queens take part in the festivities. The parade participants gather at Praca General Osorio and at 6 pm the band starts playing and the parade runs along Av. Vieira Souto, then they move right onto Rua Visconde de Piraja and come back to Praca General Osorio.

The 2021 Carnival will have hundreds of balls and dances. One of the most popular in the city is the Gay Ball at the Scala in Downtown. You will find some of the most elegant and luxurious costumes at this ball. In fact, it is so popular that it is broadcasted on television. This ball is held on the last day of the Carnival with the drag queens and their entourage in their extravagant costumes strutting down a runway in a costume spectacular. The public lines the street outside the Scala to watch the ball participants as they enter the venue. Everyone is welcomed, gay or straight.

For a change from the Samba beat, visit the Marina in the Gloria district for some electronic music parties that take place along the bay. These parties are particularly popular with the gay muscle boys and the crowd makes for some great eye candy. These events are known as gay circuit parties or “label parties” as they are called locally. They are held throughout the week and the most popular ones are the Barbies in Total Control Here Party (B.I.T.C.H) and the X-Demente Party located in the central district.

The Week is a fairly new club and has become very popular thanks to its Electro music and central location in downtown. Galeria G is in Ipanema and considered a more upscale artsy club, as it is an offshoot to the art gallery next door. To Nem Ai is one of the most popular gay clubs also located in Ipanema on Farme de Amoedo.