The Rio Samba Parade is the main attraction of the entire Rio Carnival celebration.

Samba Parade is the event where the city’s numerous Samba schools vie for the position of Grand Champion. Each Rio carnival Samba school practices their routine for months before the competition and during the samba parade they are judged on their performance, in a number of categories.

Performances are made up of dancers, singers, a percussion group and other performers. The Samba Parade takes place on almost all nights of the Carnival but it's on Sunday and Monday that the main samba schools take the runaway to compete for the Special Group big championship title.
It all happens at the Sambodromo, an area in downtown Rio that was specifically designed and built to accommodate the samba parades. 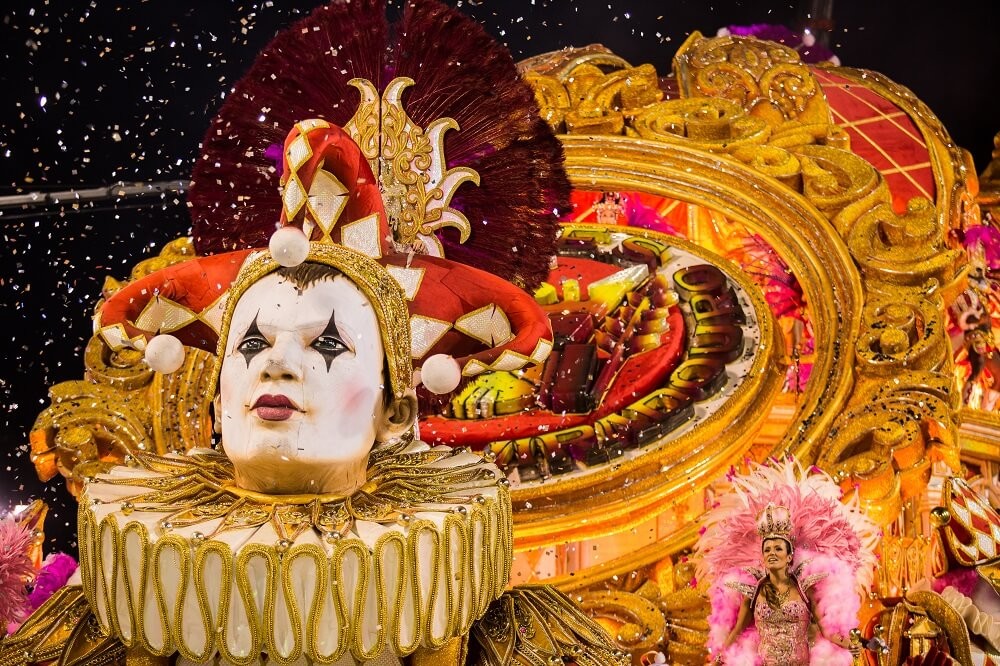 Many Samba Parades to Chose From

All eyes are on the Samba Parades at the Sambadrome during carnival days. Each year the Rio carnival samba parade begins with the Access, followed by the samba parade of the Special Group and children's parade. Every Rio de Janeiro samba school puts up a unique samba song and performance with different samba themes choreographed to perfection.

Samba schools usually belong to a particular neighborhood or in some cases to a ‘favela’, the name given to a shanty town in Brazil. These schools promote the Brazilian – African dance form of Samba throughout the year, and several months before Carnival, they begin their preparations for the Samba Parade. First, the year’s theme is chosen and then all the other elements come together, in keeping with the theme, such as the song for the year, the costumes, the choreography, the floats etc. 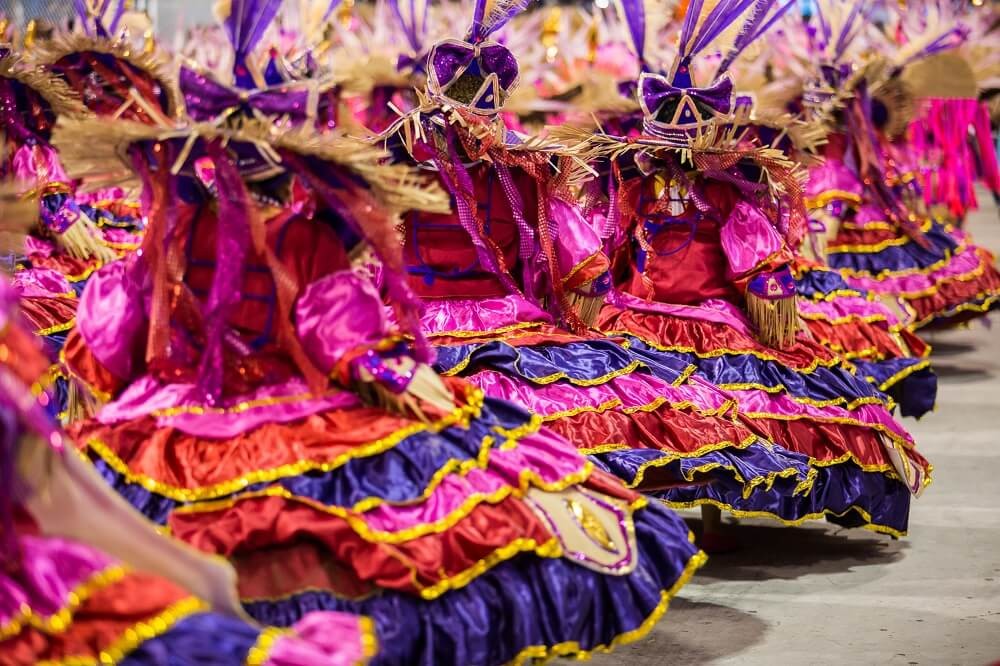 In Rio, as opposed to traditional dance schools in other parts of the world, the Samba schools mainly consist of volunteers from the local neighborhood, usually a slum or shanty town. Money is raised from the sales of their school’s tickets for the Samba parade or by sponsorship. Each school usually has a particular political, commercial or social interest as well, and often plays an important role in the development of the particular locality. Within these impoverished societies these schools are pivotal in creating a sense of belonging and purpose.

Practice for the parade usually begins sometime in August and by December rehearsals are in full swing. By Christmas the school brings out records of its theme song. Around a month before Carnival, the schools’ rehearsals, held once or twice a week, are open to the public. These provide a great opportunity to watch some of the best Samba dancers of Rio perform in their own neighborhood. Most schools will also allow visitors to participate. Since many of the schools are located in ‘favelas’ it is recommended to visit the ones that are not too far from the city’s main localities. Mangueira is the biggest and safest school to visit as it draws a lot of tourists every year and there are always adequate security measures. A token entrance fee is usually charged.

The schools which are participating in the Samba Parade rehearse at the Sambodromo itself. These rehearsals which can be watched for free differ from the actual day in that performers do not wear costumes, and trucks instead of decorated floats make their way down the runway. Still, it is a great way to get into the mood for Carnival, to see some great dancing, hear some fabulous music and mingle with the locals or Cariocas, as the people from Rio are known. The final rehearsal is quite spectacular when routines are completely in place and sound and light systems fully operational. The Sambodromo is jam-packed at this time, as people can watch the performance for free. After the final rehearsal, some of Rio’s time-honored street bands – such as Cordao do Bola Preta – perform at the venue and everyone joins in at what turns into a big street party. 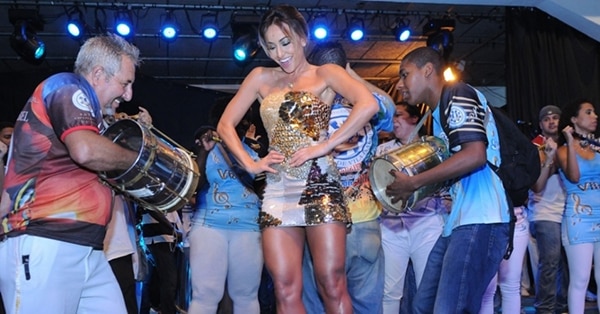 There are over 70 Samba schools in Rio, and they all participate in the annual carnival celebrations. Each school has its own trademark colors. Some of the famous schools include Mangueira, which is one of the most popular schools, while Mocidade which is over 50 years old and Portela which has one the competition 21 times are amongst the oldest. Though Beija Flor, named after the Humming Bird, which is frequently found in Brazil is not located in Rio city, it is amongst the highest ranked Samba schools.

Salgueiro has a reputation for having famous stars as part of their parades and is referred to by many as an elitist school. Unidos da Tijuca, which was established in 1931 is the only school that recognizes the influence Portugal had to play in the formation of today’s culture in Brazil. Sao Clemente’s parade themes usually focus on current issues that are affecting the people of Rio, that in the past have ranged from street children to housing deficit problems and the dangerous driving conditions in the city. 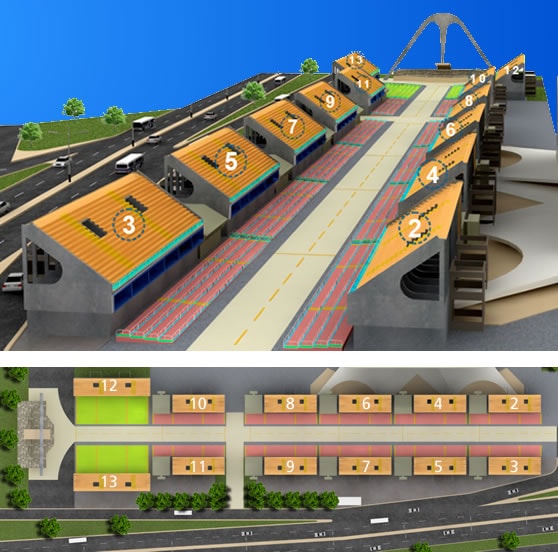 Before the construction of the Sambodromo in 1984, the parade used to be held at President Vargas Avenue, a large road in downtown Rio. Stands used to be constructed every year before the parade and pulled down once it was over. By 1983 it had become evident that the make-shift venue would not suffice to accommodate the large scale event that the carnival celebrations had turned into. Leonel Brizola the Governor at the time hired no less than Oscar Niemeyer to design a permanent Samba parade venue, which was inaugurated on 2nd March 1984.

Carnival Tickets to the function can be purchased via the internet or a travel agent. There are several categories of tickets ranging from luxury private cabins offering the best views, to unmarked grandstand seats.

See the Sambodromo transformation from June 2011 to Feb 2012.

How to get to the Rio Sambodromo

There are a number of ways to get to and from the Sambodromo. By taxi, the Sambadrome has an agreement with two authorized taxi companies that will drop you off inside the Sambadrome. Tell the taxi driver your sector number to take you to the correct entrance and on the way back, you can take one of these taxis, parked between sectors 8 and 10 on the even side and between sectors 9 and 11 on the odd side. Another option is shuttle buses, our Special Transfer, which are the best and safest way of transportation available. You can buy your transfer on our website along with your ticket. One of the cheapest ways to get to the Sambadrome is by subway. Trains run every 10 minutes throughout the night with many costumed revelers heading to the Sambadrome and the service runs 24 hours during the parade days. Buying tickets for the even sectors on our website you get free round trip subway.