Take a Look at the Sambadrome Map

The Rio Sambadrome Has a Map.

The Rio Sambadrome is now completed as the original plan of Oscar Niemeyer. Now, each of the 13 sectors include grandstands, front boxes and luxury suites. Check the sambadrome map below and understand how the original plan is being put in place, almost 30 years later.

As in indicated in the map, the front boxes of the Sambodromo are located closest to the samba parade runway on either side of it. Next comes the luxury suites which are located at an elevation, thus giving a broader view of the entire show.

A Word About the New Rio Sambodromo

The north side of the sambodromo, where a long strip of luxury suites used to be, is being rebuilt since last April to give place to a more modern building. Budgeted at approximately $19 million dollars, the new sambodromo will be funded by a beer company to recover the original project designed by famous Architect Oscar Niemeyer. Known as Marques de Sapucai due to the avenue name in which the samba schools parade, the Sambodromo reconstruction complies with the projects of bettering the city for the Olympic games in 2016, as the Sambodromo will host the marathon arrival and archery.

The old building of Brahma beer company and the old Luxury suites Sector 2, were destroyed and replaced by four new blocks. These four new blocks of the sambodromo are the sectors 2, 4, 6 and 8. Each of them will provide new seats: grandstands, open boxes and luxury suites.

The samba runway itself will gain more space for the floats and paraders, making the already glamorous carnival parade even bigger and wider. The new sambodromo walkway will make it easier for people with physical disabilities to access the many sectors at the sambodromo.

The New Capacity of the Rio Sambodromo

The entire expansion increased the sambodromo capacity to almost 80,000 people. Each new building block have a grandstand for 2880 people, 48 luxury suites for 576 people and Open boxes (frisas) for 1194 spectators. Besides the four main blocks, four intermediaries were be built with five huge Luxury suites - camarotes - for 60 people each. 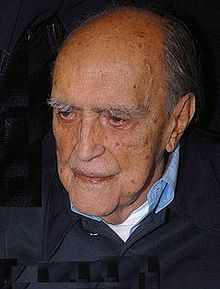 "Oscar Ribeiro de Almeida Niemeyer Soares Filho (born December 15, 1907) is a Brazilian architect specializing in international modern architecture. He is a pioneer in exploring the formal possibilities of reinforced concrete solely for their aesthetic impact.
His buildings are often characterized by being spacious and exposed, mixing volumes and empty space to create unconventional patterns and often propped up by pilotis. Both lauded and criticized for being a "sculptor of monuments",[1] he has been praised for being a great artist and one of the greatest architects of his generation by his supporters.[2] His works include public buildings designed for the city of Brasília, and the United Nations Headquarters in New York City (with others)."

"It is not the right angle that attracts me, nor the straight line, hard and inflexible, created by man. What attracts me is the free and sensual curve — the curve that I find in the mountains of my country, in the sinuous course of its rivers, in the body of the beloved woman."