The wonderful thing about Brazil is that Rio and Salvador aren’t the only places to experience the Carnival. Smaller towns like Olinda and Recife are as imbibed with the effervescent spirit of the Carnival steeped in strong Afro-Brazilian and Indian traditions. Most tourists head to Rio, but Olinda and Recife are extremely popular with Brazilians and a few tourists as well. 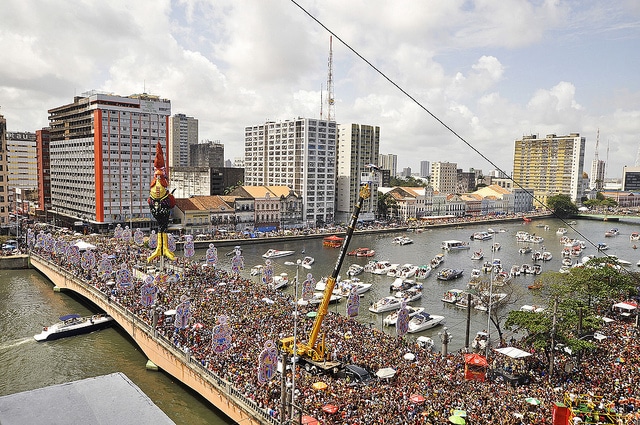 The two cities share a common style of music, the Frevo, a distinct rhythm accompanied by dance steps derived from capoeira and combined with the twirling of colorful umbrellas. More than the competitive spirit like in Rio, Olinda and Recife believe in the spirit of participation with everyone joining in the celebrations. Locals and tourists, everyone is welcome to follow the street bands as they please.

Parade of the Rooster at Dawn

If you want to be in the midst of the largest crowd in a Carnival, then Recife is the place to be. The Desfile do Galo da Madrugada (Parade of the Rooster at Dawn) has people in a frenzy dancing to the frevo on Saturday morning from 6 am onwards. The parade begins from the historic Recife landmark, Forte das Cinco Pontas, with a huge statue of a rooster making its way down the streets of Old Recife. Everyone is welcome to join the crowds dancing to the frevo played by bands or trios elétricos set atop trucks. Although costumes are not mandatory, it is always good to keep up with the tradition. For those who would like to watch from the sidelines, there are mezzanine boxes or camarotes set up along Avenida Guararapes purchasing  tickets. You can book an entire block of 20 seats as well.

Night of the Silent Drums

The Carnival in Recife celebrates African heritage in a traditional ceremony called Noite dos Tambores Silenciosos or Night of the Silent Drums. On Carnival Monday night, Afro Brazilian drummers take center stage at Praça Terco. With the approach of midnight the drums beat reach a fevered pitch only to fall silent at the stroke of midnight for a few minutes in honor of Maracatu slaves who died in bondage. This is followed with a prayer by a priestess of the Afro-Brazilian religion, Umbanda.

Carnival Sunday in Olinda has the best blocos taking center stage with the most original and creative costumes, some bordering on outrageous. Watch out for the bloco, Enquanto Isso Na Sala Da Justiça (Meanwhile at the Hall of Justice), which has caught the fancy of many tourists. 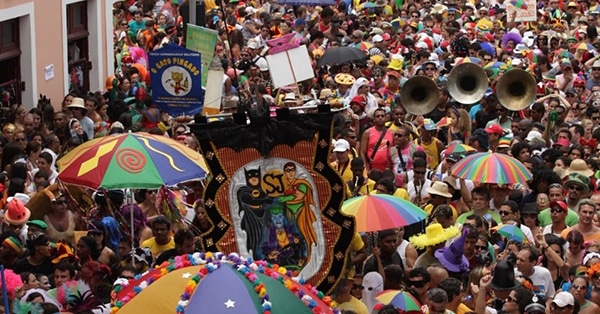 Tourists heading for the Carnival in Olinda can enjoy an encounter with the giant dolls. This old tradition features giant dolls as tall as three meters that accompany the parading bands to the sounds of the frevo through the streets of the city on Carnival Saturday. The most famous giant doll is the Midnight Man or Homem da Meia Noite who marks the beginning of the parade.