Numerous good restaurants, night clubs, posh mansions and condominiums are at São Conrado, one of the most elite neighborhoods of the city.

São Conrado is located in the South Zone of Rio de Janeiro, between Barra da Tijuca and Gávea, amidst the beautiful landscape of mountains which lead to the sea. The area has numerous good restaurants, night clubs, posh mansions and condominiums and is home to the rich and famous of Rio de Janeiro, including entertainment stars and the city’s mayor. The Acadêmicos da Rocinha samba school is also in this neighborhood, where tourists can watch samba groups practising their performances for the Carnival and perhaps even participate. 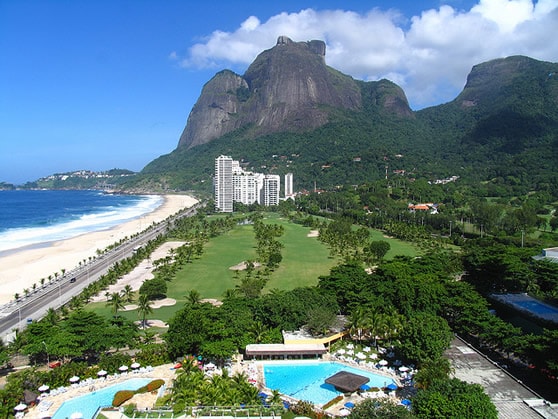 Also known as Pepino (cucumber) Beach, the huge sea swells here, provide a spectacular seascape and allow experienced surfers the opportunity to prove their skills. Swimming however, is not recommended. Numerous bars and hotels dot the beach and its surrounding areas, where one can sip on a cocktail or beer while enjoying the magnificent sights of the sea and beach activities.

While the fainthearted can practice a few rounds of golf at the chic Gávea Golf and Country Club, São Conrado is really the place for those in search of an adrenaline rush. Hang gliding is very popular here, with locals as well as tourists. The take off points are usually from peaks within the Tijuca National Park. Tandem gliding, along with experts, offers you one of the most breathtaking and exciting ways to see Rio de Janeiro. From the lush forest area of the national park to views of Sugar Loaf mountain, Christ the Redeemer statue, Rochina - the largest favela in South America, to the luxurious mansions of the area, hang gliding allows you to experience the diversity of the city, with the landing point, usually at the beach.

Another activity reserved only for able bodied adventure seekers is an 8 hour trek on the Pedra da Gávea (Gávea Rock), a massive granite table mountain that rises from the Atlantic Ocean, at the southwest tip of Tijuca. After 2 – 3 hours of uphill climbing, hikers are rewarded with magnificent views of the city from the plateau-like peak. Do remember to ask your guide about the legends and myths surrounding the rock. If rock climbing is not your cup of tea however, you could visit Pedra Bonita, which can be accessed by car and which provides equally breathtaking views, including that of what appears to be a sculpture of a giant’s face, created over the years by wind forces on Pedra da Gávea.

Considered one of the most luxurious malls in Brazil, the São Conrado Fashion Mall houses over 130 stores, sporting national as well as international designer stores, including Versace, Kenzo and Ermenegildo Zegna to name a few. This is the place if you just happen to be in the mood to splurge on a high fashion handbag or pair of shoes and while you stop to grab a bite at one of the numerous fine dining restaurants of the complex, you may just spot a couple of famous Brazilian entertainment personalities, who are known to frequent this mall.